Winhex 19.8 license code. The Garud Commando Force is the special forces unit of the Indian Air Force.It was formed in September 2004 and has a current strength of over 1500 personnel. The unit derives its name from Garuda, a divine bird-like creature in Hinduism. Garud is tasked with the protection of critical Air Force bases and installations; search and rescue during peace and hostilities and disaster relief during.

Kore Kara no Granblue Fantasy showed us a peek at the near future for GBF. This is the condensed version of our translation thread!

(Previous versions of this translation contained errors about the Six Dragons post, the NM100 post, and left Huanglong and Qilin off of the adjusted drops list. They have been corrected. Thank you to all who wrote in, especially those of you who were polite about it.)

As previously mentioned on Granblue TV Channel, Rise of the Beasts returns on October 6th. A gold brick will be added to the shop.

Proving Grounds starts on October 13th, with Dark bosses. This time, Jack-o’-Lantern will be one of the bosses! The Proving Grounds boost: triple attacks will deal more damage. The weapon name appears to be Zwei Schädel, or “two skulls”

On October 20th, Forgiveness and Gratitude (the Yuel, Societte, and Kou event) reruns.

As first reported on Granblue TV Channel, the Side Story for October is Robomi: Generations and the character uncap is (wind) Mirin.

In early November, 12 characters (two SSRs from each element) will be getting ability and CA changes, updating their strength to fit the current game better. These characters are:

Changes coming to November Unite and Fight: They are currently working on a boss more difficult than current Nightmare 100. It will be available from Finals day 3 and onward, and can only be joined by crew members. It will become available after defeating a certain number of NM100s within your crew, and will provide higher honors per battle. It won’t have updated graphics, animations, or triggers; it’ll just be tougher, with higher defense and attack. It will still cost the same AP and meat as regular Nightmare 100.

Full Auto goes live on October 3rd: Full auto will use buffs, then debuffs, then damage skills, then auto attack. It will not use Fields, heals, summons, or skills with 0 cooldown. While it’s going, you can still put abilities and summons on the ability queue.

You can toggle between Full Auto and traditional Auto on a quest by quest basis, and save your choice for each quest.

Coming… soon? The My Page section will be redesigned!

The main changes: the draw banner will be reduced in size, and positioned below the Draw button. If there are multiple draw promotions going on at the same time, it will be a carousel that can be swiped back and forth.

During Premium Gala and Flash Gala, the color of the Draw button will change based on the current banner.

The Seraphic Weapon banner will be changed, and put at the bottom of the home page.

Arcarum and Casino banner sizes will be changed.

On the Top/News page, the draw and event banners will no longer be displayed.

Coming Soon (but no dates)

In addition to the Six Dragons Impossible raid that was revealed in the Summer Stream, there are more raids in the works. Details will be revealed at a later date, but for now, here are two silhouettes that are totally Leviathan Malice and Grand Order But With Way More Dragons. 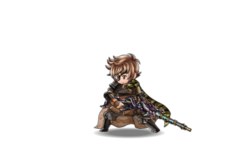 That’s about it for this month! See you in Proving Grounds, those of us who had to fight Jack-o’-Lantern as fledgling skyfarers will finally get our revenge!

This article is about the summon stone. For the raid, see Garuda (Raid).